Do you need a special router for accomodating gigabit internet connections ?

This article would help understand why your wifi router may not support gigabit internet speeds and our recommendation on the type of router you need to purchase for this to work.

Check out our FAQ section at the end and get the answers to all queries you may have.

How do I know if my wifi router supports gigabit internet

Note that gigabit speeds on Wifi channel and LAN on the wireless router specifically provides gigabit speed for the internal network and not the internet.

What router should you buy for gigabit internet

If you have a small home, the TP-Link AX1800 WiFi 6 Router (Archer AX21) – Dual Band Gigabit Router is a good choice for gigabit internet. The following are the top features it supports.

Gigabit speeds on the wifi router is explained in the following section.

The TP-Link AX1800 WiFi 6 Router (Archer AX21) – Dual Band Gigabit Router supports gigabit speeds on the WAN port. This is the most important criterion for a router which has to support gigabit internet.

Gigabit speeds on Wifi and LAN

This makes the TP-Link AX1800 WiFi 6 Router (Archer AX21) – Dual Band Gigabit Router an ideal wifi router for gigabit internet as it supports gigabit speeds on all the channels.

The below screenshot shows the back panel of the router where the gigabit ports are mentioned. 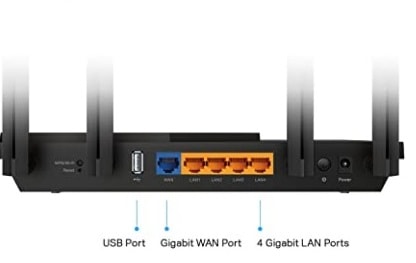 The wifi router supports VPN server on it. Authorized devices can connect to the router from the internet using VPN and gain access to the network.

The wifi router is easily configurable with TPLINK tether app which can be downloaded from the google playstore.

The wifi router has 4 antenna which provides high coverage area for the wifi network.

All the above features would make the TP-Link AX1800 WiFi 6 Router (Archer AX21) – Dual Band Gigabit Router an ideal choice for gigabit internet.

1. My router supports gigabit speeds on the Wifi channel and LAN ports. Would this suffice ?

This is where most people get it wrong. Gigabit routers need not necessarly support gigabit WAN ports. You need to look into this specifically. If the WAN port does not support gigabit internet, you would not achieve the required speed even if you have upgraded your internet plan.

2. My internet speed is 300 Mbps. Do I need to have gigabit on the WAN interface

Yes. You need to have. WAN ports can either support 100 Mbps or 1000 Mbps. If your internet speed is between 100 and 1000 Mbps , you need a Wifi router which supports gigabit on the WAN port. if the port is 100 Mbps and the internet speed is gigabit, you would only get a maximum speed of 100 Mbps.

3. How do I know if my router has gigabit wan support ?

4.I have upgraded my router. How do I know if my internet speed is gigabit

The best way to find this out is by a speed test. Goto www.speedtest.net and check the internet speed.

Check out the best firewall router for home