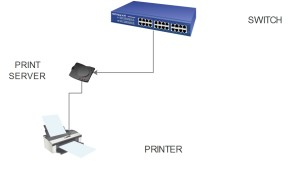 Tom has a printer in his home network. Currently the printer is connected to his PC on the Desk. He and his wife has a wireless laptop. For any printing purpose, Tom has to send the content to the desktop PC via email or copy it it to a USB and connect it to the PC and print. Printing is not possible directly from the laptops. This is a classic scenario where a print server can be used. Tom can purchase a print server and make the printer a network printer. Once the printer is on the network, tom can now then print from the laptops.