This article explains the technique you can use to detect rogue access point on a network using the windows command line.

Rogue access points are unauthorized devices which are setup on a network by attackers. The users on the network would connect to the rogue AP to gain access to the systems and services on the corresponding network. Attackers would passively monitor the communication between the user and the AP to analyse confidential and sensitive information like username / password, confidential data etc.

Wireless scanning can be performed by using inbuilt windows commands. The command which can be used is netsh wlan show network. Netsh is a library which supports various commands. It is associated with wlan to show the different wireless network status. To display the list of wireless access points on the network the following command is used.

After connectivity is established between AP1 and the laptop, type the Windows 7 command which would display the list of available access points on the network. The command along with the screenshot is shown below. 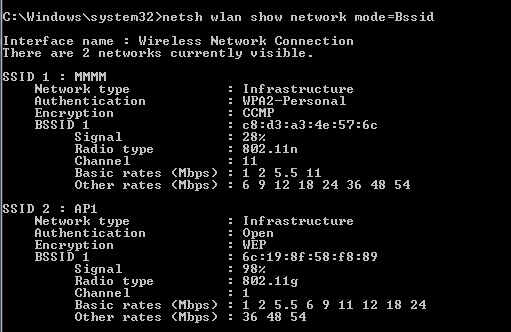 It can be observed that two access points with SSID name MMMM and AP1 is displayed. Using the output of the command, the rogue AP can be detected as MMMM is not authorized on the network.
Rogue AP detection using mac-address

Appropriate filtering is used on the earlier command to display only the mac-address / BSSID of the output. The command is shown below.

The findstr filter would display only the lines containing the BSSID, which would contain the mac-address of the access points. The screenshot of the output is shown below.

From the above topology, it can be observed that the first BSSID / mac-address is unauthorized as only the second BSSID which is 6c:19:af:58:f8:89, is the valid mac-address of authorized access point which is AP1.

Port-security is a feature which is available on switches. The feature can be configured to allow a list of known or authorized mac-addresses on its respective ports. If an unknown mac-address is identified the port can be configured to transition into blocked state. When an attacker attempts to connect a rogue AP to the switch port, the port would be blocked as the mac-address of the AP is not in the allowed list, thus defeating the attempt of the attacker to setup a rogue AP.

Check out our Ebooks