This article explains the factors on a router which affect internet speeds. A FAQ section is included at the end of the post to understand the different types of routers you need to purchase for improving the internet speed.

There could be situations where you have a high speed internet but still not receiving the intended speed or your network is generally slow when accessing the internet.

Your wireless router could be a major factor which could be causing this slow speed. The following factors would help identify the different reasons as to why your router is causing this issue. 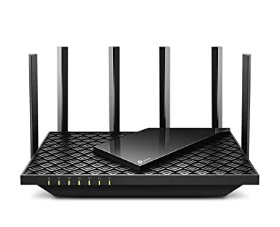 The WAN interface or the WAN port of the router connects to the internet. This is normally a single port which you see on the router unless you have a Dual WAN Router.

If you are planning to purchase or upgrade your router, then it is always recommended you buy a router which supports gigabit WAN interfaces else an internet upgrade may not prove useful.

In this scenario, it is recommended that the router is upgraded to a router which supports gigabit WAN interface.

Lets take an example of a wireless router which supports 1750 Mbps. This speed is allocated to 2.4 Ghz and 5 Ghz radios on the router. The 2.4 Ghz radio can support speeds upto 300 Mbps whereas 5 Ghz radio supports 1450 Mbps.

It can be observed that the net effective speed on the network is affected by the speed supported by the wireless router. Consider upgrading your router if it supports slow speeds.

If the interface is gigabit, data is transferred at a speed of 1000 Mbps till the router and then it uses the speed allocated by the ISP. So it can be observed that the effective speed would be much higher when a wireless router with gigabit ports are used.

If there are PCs connecting to the router interface, it is highly recommended you purchase a router which supports gigabit LAN interface. It should also be observed that the network card on the PC also supports gigabit speeds for achieving the intended speed.

1. My router is dual band but it does not support gigabit Wifi speeds. What router should I purchase

2. My router does not support 5 Ghz. Which router should I buy.

3. My router supports gigabit, but my laptop supports only 2.4 ghz. What should I do.

You need to purchase an external Wifi adapter which supports 5 ghz. Check out Wifi adapters here

4. Which router should I buy to support gigabit internet speeds